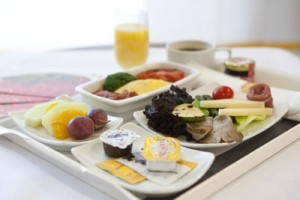 Passengers travelling from Athens to Germany with Lufthansa will experience the aroma of Greek cuisine both in Business and Economy class.

Departing from Athens international airport Lufthansa’s passengers will receive a delicate «taste of Greece», as part of the airline’s commitment to promote local products and flavours and add a local flair to its meals.
“The delicious recipes promote Greek flavours and local dishes. They are a delight not only for the palate, but also for the eye”, said Paulo Yoshikawa, Lufthansa’s Director for Greece and Cyprus, not able to hide his enthusiasm. “Breakfast, lunch or dinner are all made from fresh ingredients and come with plenty of vegetables and herbs”, he added
Characteristic recipes with Greek flair are “fish a-la-Spetsiota” – a delicious seafood dish from the island of Spetses, tagliatelle with seafood (kalamari, prawn, octopus) in tomato & ouzo sauce or spinach “sfougatto” (quiche) with potato croquette grilled tomato wedge & village sausage.
Innovative and modern, always aiming for a superior travel experience, Lufthansa is among the few European airlines that offers hot menus from the classical Greek cuisine in Economy Class, too.
“Greek recipes are inspiring, full of freshness and health. The ingredients, the flavours, the combination of herbs and materials offer a tasteful, healthy and light meal for our air travelling”, said Mrs. Brenner, Area Manager Product Design and Caterer Management Europe and North Africa.
Through sense, natural tastes and aromas, Lufthansa passengers will virtually “travel” to the islands or the small mountainous villages of Greece. Food will be a feast to the eyes and the mouth and leave the travellers with the best last impression of the country.
Posted by the Easytraveller Team

A short photographic presentation of the Permanent Collection of the Museum of Cycladic Art in Athens International Airport from 12 October till 06 January 2012. In this presentation visitors will have the opportunity to experience the Cycladic civilization, one of the oldest civilizations of Europe organized communities, through images and texts. Visitors will learn more about the Cycladic figurines, as well as clay, stone, and metal vessels and objects of the era.

The collection of the Museum of Cycladic Art, one of the largest collections of its kind worldwide, including more than 400 objects from clay, stone, marble and metal, all periods of the Cycladic civilization. 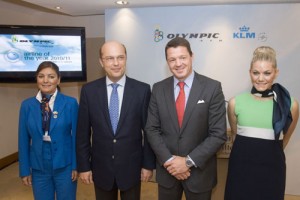 An agreement signed between the two airlines and being in force from 01 September, entitles the airlines to market flights between Amsterdam Airport Schiphol and Athens International Airport Eleftherios Venizelos for connecting traffic under each others flight numbers. 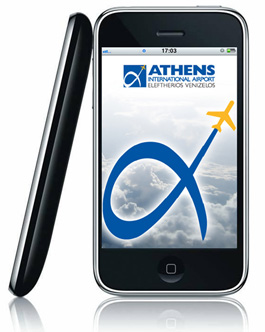 A new electronic service called ATH Airport is available from the Athens International Airport for iPhone.

Find it on iTunes ! 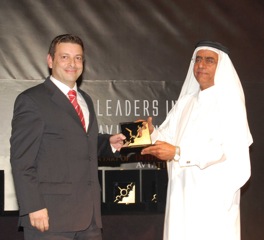 As “Airport of year 2010” was rewarded among the leading air transportation companies  Athens International Airport “Eleftherios Venizelos”, in recognition of quality of services to the passengers and his customers, but also for the  powerful enterprising model and his competitiveness. This important rewarding was realized in Qatar, during the annual Doha Aviation Summit.
The airport of Athens was distinguished between important world airports, for the most excellent operation, the quality of his services, the innovation and the initiatives in the use of technology, but also for the business dexterity and his developmental strategy. The evaluation strengthened particularly the success of his enterprising model, with important contribution in the national and local economy, as well as his corporate responsibility to the passengers, the collaborators, and the workers. Moreover the airport distinguished for the pioneering programs of economic motives and the developmental of marketing practices that provides to the air companies, supporting consequently his collaborators in a particularly difficult period for the sector.
In the three day Congress of Air transportations of Doha, more than 200 representatives of airports, air companies and government owned institutions, examined the important challenges that faces the sector. For the airport of Athens, Middle East is the market that presents the best records last 3 years (January-September 2010: + 13.8% in the flights and + 10.9% in the passenger movement).
On behalf of Athens International Airport, the reward received by Mr Giorgos Kallimasias, Director of Corporate Planning, from the Chairman of Service of Civil Aviation of Qatar, HM Abdul Aziz Al Noaimi.