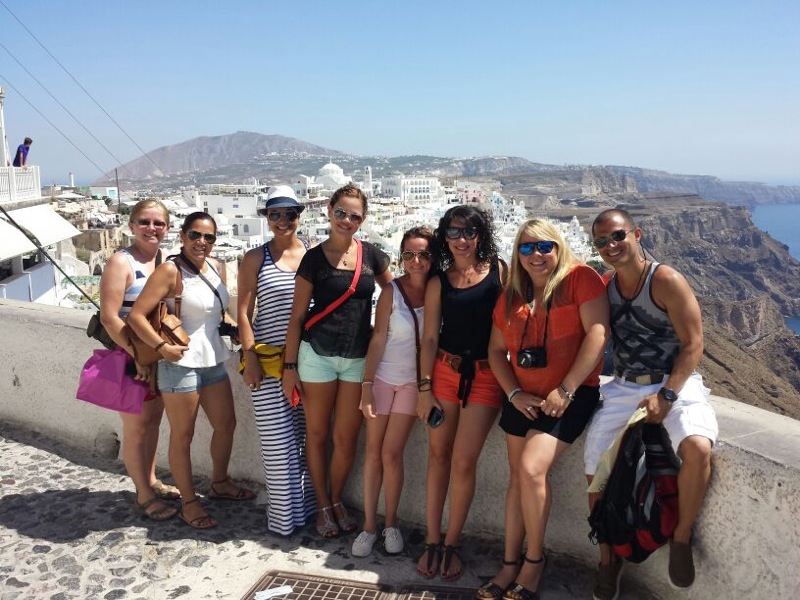 Dear Apostolos,
Thank you so much for all your services and all you did for us during our Greek vacations!
We are all grateful and enjoyed our custom package to the fullest! With the problem we had when our luggage were kept in Rome’s airport for almost 2 days, we wanted to specifically thank you, since you brought all our luggages to the port even when it wasn’t your responsibility.  We will never forget that moment of joy!! You were so diligent and nice!!
All the transfers and services were good and on time.
Thanks again and we all would definitely recommend EasyTaveller to anybody for vacations in Greece!
Best regards,
Erika Ortiz & group
Puerto Rico
For more clients impressions please click here
Share and Enjoy:

We have been traveling for quite some time and now I have the opportunity to provide feedback on our wonderful trip.  Thank you so much for arranging it!  The accommodations were very good and the tour was well paced.  The only thing I would do differently next time was allow more time, especially on Crete. Good job!
Blaine and I have spent two weeks in Greece and had a wonderful time. The first week was filled with the classical portion of the Greek mainland. I got so confused with the various gods, goddesses, foreign occupations and wars that I broke down and bought a book about mythology and spent a good part of some evenings researching the political history. It helped to orient us to this beautiful country.
In Athens and in Iraklion (capitol of Crete) we witnessed political demonstrations. They did not appear to get violent but we chose not to stick around in case they did. In Athens we also toured the Acropolis, Plaka (old city) and the National Archeology Museum. Amazing!!!
We had the most wonderful guide for the tour to classical Greece (Corinth, Epidarus, Olympia, Delphi and Meteora). His name was Yani and had unending enthusiasm and a vast wealth of knowledge. He was probably the best guide we have ever had. The group was also interesting. We traveled with people from New Zealand, Australia, Canada, England, Singapore, Malaysia and, of course the US. The group was a mixture of gay and straight people and reminded me a lot of the poeple who attend our UU church in Denver. Conversations at meal times were very entertaining! One night we ran into our guide, Yani and bus driver, Nicholas outside a Greek taverna. He invited us and several others from our group to join him. The wine flowed and at the end of the evening her refused to let any of us pay!
The second week we were on our own touring several Greek islands. My favorite was Mykonos because no cars were allowed within the town walls and everything was in walking distance. However, the hotel in Santorini was the fanciest place I have ever stayed. It had five swimming pools! We took a day trip to the island of Delos. It has the largest archaeological site in Europe and was the birthplace of Artemis and Apollo. Yesterday we went to Knossos, I city that was founded in 1700 BC.
Iraklion was the only place we had language difficulties and navigational challenges. Not much is in English and the roads were wound within the Venetian walls of the 15th century. The problem was solved by buying ticket to a hop on hop off tour bus. We sat on the upper level and were able to figure out where we were. We ate at this amazing place called the Fish Tavern which was cheap, good and overlooked the Venetian harbor.
Today we are off to Istanbul.
I hope everyone is well and happy,
Hasta pronto!
Felicita
Phylis and Cloyce
USA
For more clients impressions please click here
Share and Enjoy:

Dear Apostolos,
It was wonderful meeting you,  in person, in Athens in the early days of September, and I want to thank you, even a little belatedly, for your kindness in brining our tickets to our home in Halandri.  Again, thank you very much indeed for all your efforts in making our cruize a memorable one.
We had a really wonderful time and everything was far more than we expected.   We especially enjoyed the friendly and hospitable atmosphere of all the crew members who went out of their way to make our cruize as comfortable and as pleasant as possible but especially the junior cabin attendants, the waiters – who were so friendly and went beyond the call of duty in every respect.
The entertainment on board was of a very high standard and we took away memories of a life time!   We have not hesitated to recommend you to everyone who is planning a trip to Greece and I am sure that once, spring and summer are on their way, you will be getting quite a few bookings from this part of the world – deep from the heart of Africa!
We are very  grateful.
Teddy
Kenya
Share and Enjoy: 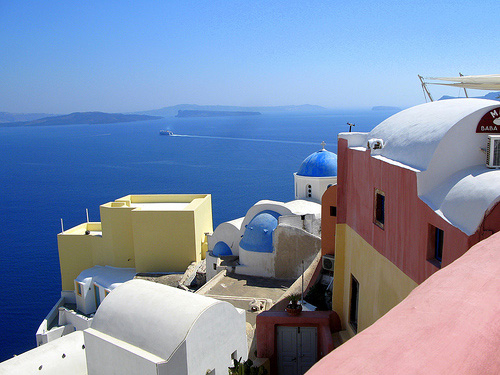 Apologies I wasn’t able to get around to this email as I’ve been swarmed by work the moment I reached Singapore.

Well, I must say that I’m really impressed by how things are co-ordinated. Everything’s like clockwork. Our entire trip went without a hitch. No disappointments at all. The tour guide that were arranged for us was very knowledgeable and it made our trip enriching. Maybe only the fact that most museums and sightseeing spots are closed at 3pm. So we couldn’t quite cover everything in Athens.

But all in all, it was a fantastic holiday thanks to easytraveller.

Thank you for customising the package to fit the hotels we preferred. We really, really enjoyed ourselves in Greece and we see ourselves coming back some time!

Dear Apostolos,
It was a great pleasure to work with you for our Greek cruise arrangements and transfers. Email communications were very prompt and helpful. You never failed to answer all my many questions and allay my fears about dealings so far distant. You were more than courteous and professional, always willing to make our dealings as easy as possible. I thank you for all of that. I also thank you for your observations about the various Greek islands and shore excursions – they were immensely helpful. It was a pleasure to meet you and I will not hesitate to contact you again if my travel plans bring me to Greece. 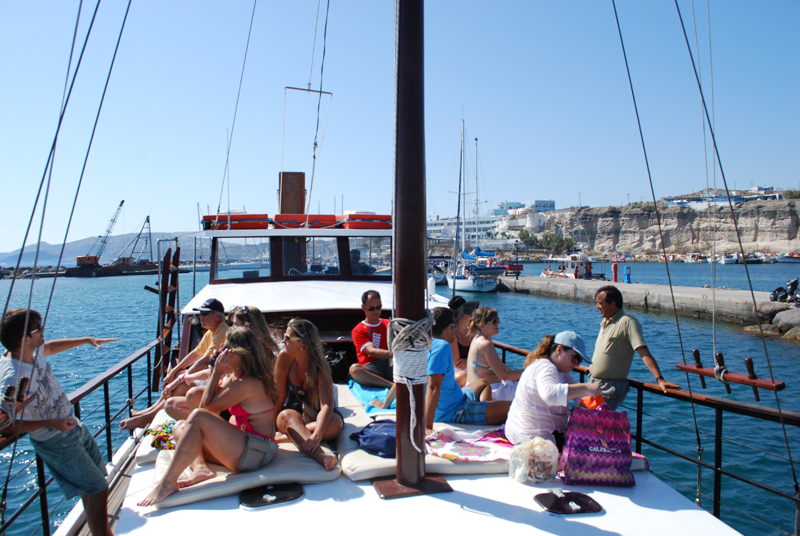 Hi Apostolos,
I was going to drop you an email this week. But you beat me to it.
Thank you so very much for organising an amazing trip for us. We loved every minute of it! Everything was so well arranged and we really appreciated all the pick up transfers. Especially during our ferry ride back to Atehns, we arrived at 1.30am and yet there was a driver waiting for us. Thank you so much for everything.

The trip is everything we imagined it to be and more! Greece is a lovely beautiful country!

I will definitely recommend your services to friends who’re keen to visit Greece!
Thank you once again Apostolos!
Regards,
Janita & Kavin
Singapore

I would like to express my thanks to Easytraveller for my fuss-free honeymoon over at Greece in April 2011.  The designated drivers were polite and very puntual.  No hiccups at all for the whole trip between Athens and Santorini.

I will definitely recommend Easytraveller to all my friends!

We enjoyed our cruise so much! Thanks so much for meeting us at such a late time, and for smoothing everything over for us!

Details and booking for this cruise 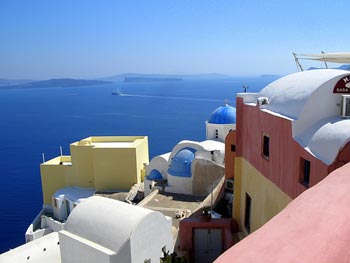 First and foremost, we both would like to express our sincerest appreciation for the excellent service that you provided in arranging our vacation. Being our first visit to Greece, we did not know what to expect, but after this vacation we will in all probability make a return visit. Thank you very much for putting this fantastic vacation package together, we were thrilled with what you organized for us.
While in Athens, the tour packages were very informative and educational. Our tour guides were always knowledgeable and extremely courteous. To be able to open our curtains at the Astor Hotel and look directly up at the Acropolis is a vision that will remain with us for the rest of our lives. The central location close to Syntagma Square could not have been better.
Santorini was breathtaking and was beyond our wildest dreams. We rented a car for a week and were able to tour the whole island. Our stay at the Villa Odyssey was a speical higlight of our vacation. Our hostess Maria made us feel like we were special guests in her home. We highly recommend that you add Villa Odyssey to your list of preferred accommodations on Santorini Island.
Paros was also relaxing and we rented a car for a day touring the island. The beach in Parikia was excellent.
Transportation provided by the taxis for our pickup at the hotel, airport, ferry ports was very precise and the drivers were always punctual and waiting with our name on a placard.
Once again thank you very much for arranging our memorable worry free vacation We will not hesitate to recommend your services to anyone from our area that may be interested in visiting beautiful Greece.
Sincerest best wishes,
Edd & Dianne
Canada 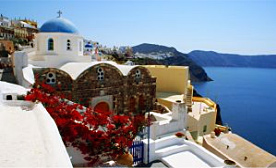 Dear Apostolos
My wife Marlene and I (Charles) would like to express our sincere appreciation for your very efficient communication and service to us in all matters of arrangements from beginning to end of the preparations for the Greek Vacation we had on AquaMarine of Louis Cruise Lines from June 15 – 19.

We appreciated that you gave us accurate and very prompt service on all our questions before the cruise, both through email as well as personally when you met us at the hotel in Athens where we stayed for 2 nights before the cruise.

Your communication was efficiently succinct and clear, assuring the “unsure” holidayers such as ourselves … all matters of concern to us.

You tended to our queries without hesitation and with personal concern for which we were very grateful since we were the go-between for ourselves as well as our friends joining us from N. Ireland who also depended on us to know the details even of their questions.

Thank you very much indeed. We will without hesitation be enthusiastic to refer others to you when we meet people who have an interest in those holiday offers.

Sincerely and “thank you” once again.